Contextualising online abuse – is Twitter letting its users down?

Ever since Donald Trump chose Twitter as his own personal megaphone, the platform’s usage has become embedded in the news agenda. With a global following of 330 million users* it is seen as the great enabler of debate and discussion.

Twitter has opened up real dialogue for everyone. Living life through a lens of opinion and comment, it allows speech freer than in the playground – frequently alongside argument not as mature and rounded as that of 7-year olds.

But as well as providing a transparent conduit for conversation, Twitter exposes a darker side of the benefits of free speech where anyone can say anything with seemingly little comeback. Anonymous and fake accounts are set up with the sole intention of disseminating threat and abuse. While global social media companies are certainly making strides in dealing with online extremism, many believe Twitter is not doing enough to tackle its toxic underbelly.

“Twitter exposes a darker side of the benefits of free speech”

Labour MP Jess Phillips has recently been subjected to an ongoing campaign of intimidation and public abuse, most prominently a veiled rape threat from UKIP candidate Carl Benjamin. 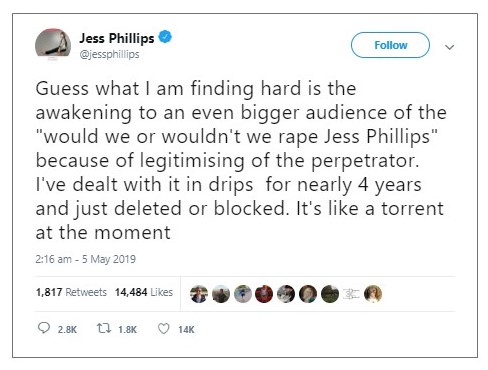 The outpouring of online abuse she’s undergoing is staggering. But when one Twitter user directed particularly violent messages at her, Twitter’s response was “Some tweets may seem to be abusive when taken in isolation, but not be when viewed in the context of a larger conversation.” 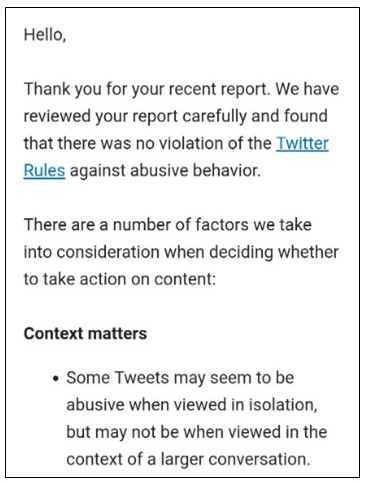 While Twitter did subsequently block the user’s account, it does beg the question if this really is taking a hard enough stance and should that account have been suspended immediately?

It’s now accepted that posts made on Twitter are part of the public domain with the source answerable for their interactions although granted, accounts are often anonymised.

If as part of a company’s due diligence, a prospective employee was found to be posting abusive messages, they would very likely not get a step further in the employment process.

If someone in the public eye was found to be posting offensive tweets however far in the past there would be consequences. Change UK candidate Joseph Russo recently stepped down amidst the discovery of racists tweets from 2012.

And the media and sporting spotlight has been awash with instances of an online history not sitting comfortably with a personality’s image and values – think comedian Kevin Hart or Australian rugby player Israel Folau.

But Twitter seems intent with putting the burden of proof back on to the abused rather than the abuser. What is context really to do with extreme sexualised threats of violence against women like the one sent to Phillips?

Twitter needs to leverage its popularity by championing and representing the victim. Its unrivalled position as a mouthpiece for all puts it a unique position.

In the Guardian, Suzanne Moore suggests our “nonchalant” attitude to social media is comparable to the phrase “What goes on in Vegas stays in Vegas”**.

A more appropriate mantra for Twitter may be “With great power comes great responsibility”. With 330 million using the platform, their power is without question.

** Source: Guardian – ‘Whose side is Twitter on: misogynists or women in public life?’ Suzanne Moore, 7 May 2019