Over the past couple of weeks, CEO of Tesla and SpaceX (and richest person in the world) Elon Musk disclosed a significant stake in Twitter, agreed to join its board of directors, went back on that decision and decided instead to make a bid to take the company private. Musk seemingly has grand plans to reshape how Twitter operates and functions.

For many, this comes as a welcome surprise, with numerous criticising Twitter’s lack of advancement in recent years, particularly in comparison to other social media platforms and companies such as Meta. It is also apparent the success that Musk has achieved using Twitter, with his ventures such as Tesla rarely using traditional forms of advertising in favour of social media platforms (Musk is set to collect a $23bn bonus after Tesla reported record quarterly profits).

So, it should come as no surprise that Musk took to Twitter to ask his audience what should be done about the platform and how it could be improved, highlighting the platform’s importance for free speech as “essential to a functioning democracy.” He has also expressed the idea of making Twitter’s algorithm open-source, noting that emphasising and de-emphasising tweets should be made explicit alongside any other changes that may be made. 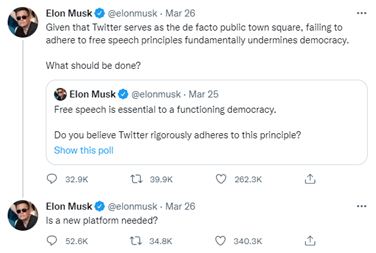 This sounds good in theory. However, there has been no shortage of news stories in recent times on the difficulties platforms like Twitter and Facebook have had in balancing free-speech ideals against censoring harmful and dangerous content. In this respect, Musk himself also has no shortage of detractors and critics; he has been routinely condemned for his outspoken opinions on taxes, unionising, workers’ rights, and the coronavirus.

As this story develops, there will be no shortage of opinion on the value that Musk brings to this potential take-over, with the reputation and presence of parties involved being scrutinised by the world’s media and the general population on social media platforms. No matter what the outcome of the bid for Twitter, it will continue to serve as the dominant domain for influencers to voice their reputationally-impacting opinions for the world to see. As a result, it will remain a primary platform to monitor closely.

Reputations can be destroyed in the blink of an eye, so it is vital for companies to communicate their core values to stakeholders and monitor what is being said in real-time. Social360 recently launched its Social Media Due Diligence report based on our proprietary search technology and years of monitoring and analytical experience, working with some of the highest-profile brands and companies in the world. If you need help or have questions, please contact Alex Baker or Giles Brown or visit our website – www.s360group.com – for more information.