Facebook was quick to explain Monday’s outage as resulting from a configuration change and to apologise for the inconvenience caused.

A statement on the company’s engineering blog noted “…there was no malicious activity behind this outage — its root cause was a faulty configuration change on our end”. With Facebook and its owned services Instagram and WhatsApp rendered out of action, the social media giant also took to rival site Twitter, again to apologise to its userbase and assure consumers it was doing everything possible to get back online.

WhatsApp and Instagram also shared similar posts on Twitter, seeing over 435k+ likes between them. This was then followed by a post from Twitter itself, which also generated over 3.3m+ likes and 118k+ comments from a number of verified businesses and users, and presented itself as an interesting opportunity for a more informal style of corporate communication. 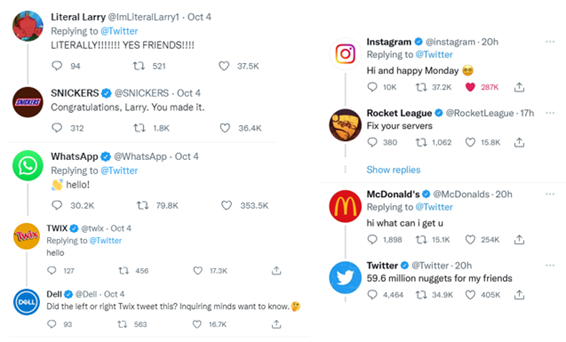 With the sudden influx of users scrambling for communication and social media content, Twitter later issued a statement following some technical issues of its own: “Sometimes more people than usual use Twitter. We prepare for these moments, but today things didn’t go exactly as planned.”

It also made a number of users consider the monopoly that Facebook holds over the social media world; Perhaps most notably, Edward Snowden remarked “Facebook, WhatsApp, and Instagram all going down at the same time sure seems like an easily-understandable and publicly-popular example of why breaking up a certain monopoly into at least three pieces might not be a bad idea.” Other prominent users of issuing comments include human rights lawyer Qasim Rashid, journalist Glenn Greenwald and popular Democratic Party politician Alexandria Ocasio-Cortez. 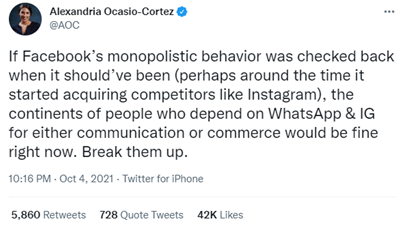 Grabbing the attention of the social media users and the corporate business world, the effects of this blackout then made its way to the stock market. Investors were clearly rattled by the outage, with the stock plummeting and billions being erased in a matter of hours. Mark Zuckerberg’s pockets were lighter by over $7bn with the founder also seeing criticism for his delayed apology for the outage.

The Independent, in its recent piece, notes a nosedive of $6 billion dollars, stating that “It was the worst session performance for the company in nearly a year with the share price falling 4.9 per cent – the worst decline since the five per cent drop recorded on 9 November 2020.” According to Bloomberg Wealth, the outage also saw Zuckerberg fall a position on the list of world’s richest people, dropping him below Bill Gates. 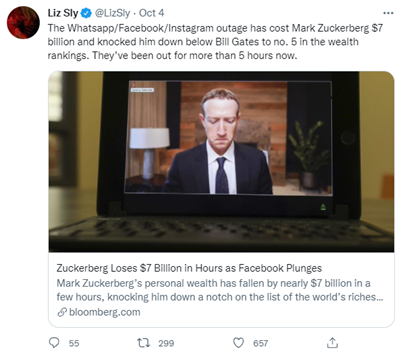 This also comes off the back of increased criticism of the company, with a whistleblower claiming that Facebook “knowingly harms children, and specifically girls, in the interest of greater profits”, as well as serious issues surrounding the development of its Instagram Kids app targeted at children. Add to this the ongoing antitrust lawsuit Facebook currently finds itself embroiled in and we see very real cracks appearing at the company.

Clearly there are issues with Facebook at the moment, but with a lack of strong competition and a market monopoly on social media, the question remains whether the company can bounce back from such damaging blows to its global reputation. If you ask people what they did during the blackout, many will say they jumped over to Twitter and other messaging apps for a few hours to stay connected. But, likely, others saw it as a welcome break from social media, as well as a reminder to limit its use.

Rest assured, however, the memes continued unabated, with users from around the world on other social media platforms, especially Twitter, discussing and joking about the blackout. 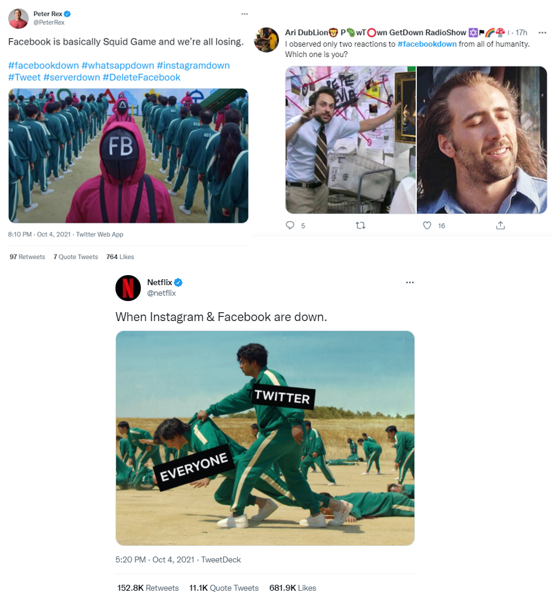 Social360 is a digital monitoring service that helps companies track their reputation in the vast social media environment. If you need help in this area, or have questions or enquiries, please get in contact at info@s360group.com or by calling +44 208 875 7969.