Mental health, return to the office and ESG: are the investment banks getting it very wrong?

As Covid infection rates continue to fall in the UK and US, companies are embarking on plans for a return to the office. Among workers who are facing this move sooner rather than later are investment bankers, with recent news of Goldman Sachs and JP Morgan informing their staff they need to be back in the office at the start of the summer.

JP Morgan circulated a memo to employees stating “We would fully expect that by early July, all US-based employees will be in the office on a consistent rotational schedule”.

Following a year when working from home became the norm for companies such as JPMorgan and Goldman Sachs and flexibility over working patterns is being embraced by many other banks  – with HSBC announcing its plan for head office hotdesking – these statements seem out of kilter with employees’ preferences. And employees are not holding back in their criticism.

On employee review site Glassdoor a JP Morgan vice president complained about leadership’s sudden decision to return to the office, claiming “complete disrespect for us … remote work is the wave of now”. Meanwhile, a Goldman Sachs’ executive wrote about the company being “stuck in old school mentality in terms of work flexibility” while another admonished the company as “full of institutional inertia”. 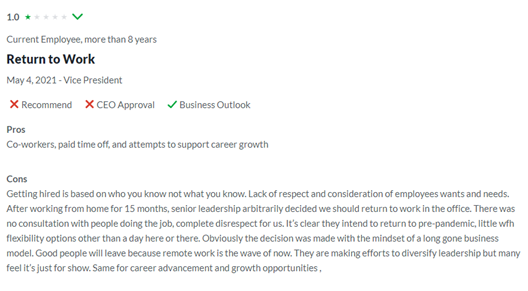 Goldman Sachs’ CEO David Solomon previously described working from home as an “aberration” which comes in stark comparison to Twitter’s Jack Dorsey who has told his employees they can work remotely on a permanent basis. His remarks come hot on the heels of a leaked internal survey of junior staff showed they were averaging around 95 working hours a week, with one respondent describing the conditions as “inhumane”. 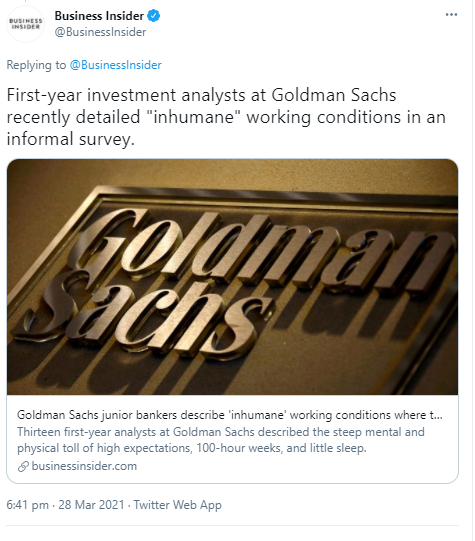 In Mental Health Awareness Week in the UK we ask what effects are the stance of companies like Goldman Sachs and JP Morgan likely to have on existing and potential employees? 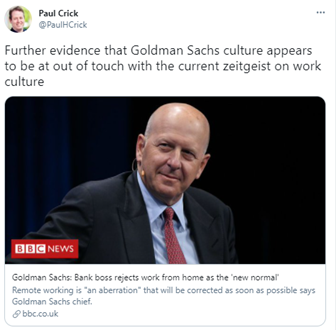 ESG is fast becoming not only a common standard for socially conscious investors, but also for all round ethical judgements on companies – and the way companies treat the mental health and wellbeing of their staff is an intrinsic part of these ethical judgements. We looked across our Social360 database of influential sources and found that discussion of employee mental health and wellbeing is accounting for a significant amount of noise within the ESG space – amounting to around 2k individual items of conversation a month.

Companies are struggling to come to terms with the S of ESG and their interactions with society – the recent Deliveroo IPO debacle confirms this. Pronouncements such as those from Goldmans and JPM directly affect the way these institutions treat their employees and are going to put a huge red flag on any future talent acquisition, let alone being an indicator to current employees of how seriously they take any mental health concerns.

Employees are demanding more socially responsible and conscious behavior from the companies that they work for and invest in. Along with the rise of cancel culture, these developments herald the coming of a time when employees and individuals hold more power in holding corporations accountable.

The BBC carried out a survey last week which concluded that out of the 50 biggest employers in the UK questioned, almost all said they weren’t going to bring staff back to the office full time. Again, this puts the stance of Goldman Sachs and JP Morgan wildly out of synch with popular thought and employee preference.

The behemoths of the investment banking world have never been known for their humility, but in times when they are promoting their own ESG portfolios, their own sustainability standards, shouldn’t they also be looking inward at their own business practice or do they hope their arrogance will see them through?

Companies who do not adapt to the changing times and become more flexible may find themselves facing difficulties with staff morale, recruitment and turnover. The damage being done to their corporate reputations by these sweeping generalisations, out-of-date rules and flagrant disregard to their employees’ mental health could really work to their detriment. 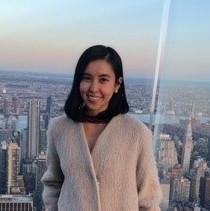 If you'd like to know more about how Social360 can help you monitor your ESG reputation, fill in the form below.