Meta: The data behind Facebook’s rebranding

The announcement of Facebook’s rebranding to Meta took the internet by storm, and continues to attract commentary and discussion from around the globe.

Within 72 hours of this announcement, Social360 discovered a number of interesting findings based off a sample size of 18,000 tweets and their accompanying analytics, providing useful analysis into the reputational repercussions of this rebranding.

The most retweeted post is the company’s own post (10.5k+ retweets), reinforcing its virtual dominance and suggesting that Facebook still has its loyal supporters. The most liked tweet (46.7k+ likes), which is also the second most retweeted post, is by a tech company who calls out Meta for using a similar logo to theirs, and  pokes fun at Facebook’s data privacy procedures. 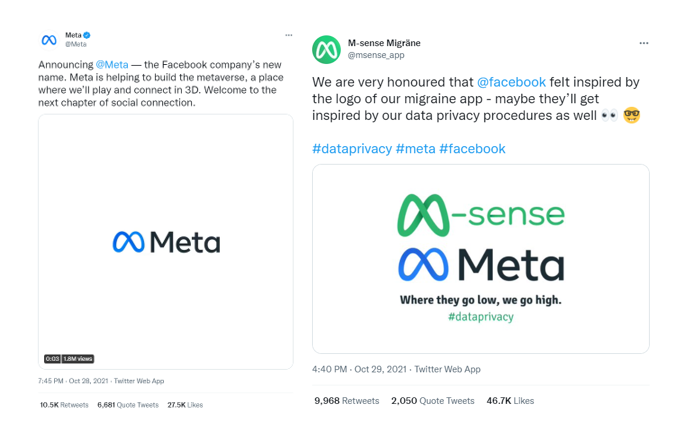 The source with the greatest number of followers that reports on the rebranding is CNN, with 55.1m+ followers. One opinion piece it shares equates the rebranding as the company’s “escape hatch” whilst another highlights its “real-world harms”. The most shared URL on Twitter regarding Facebook rebranding also comes from the news source CNBC’s piece ‘Facebook changes company name to Meta’. The piece’s narrative is mainly neutral towards Facebook, despite also noting whistleblower and ex-employee Frances Haugen. 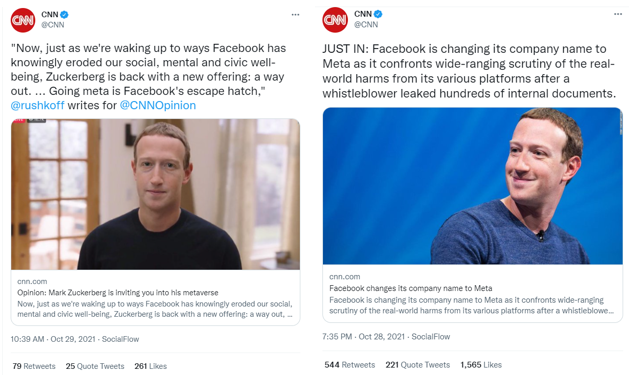 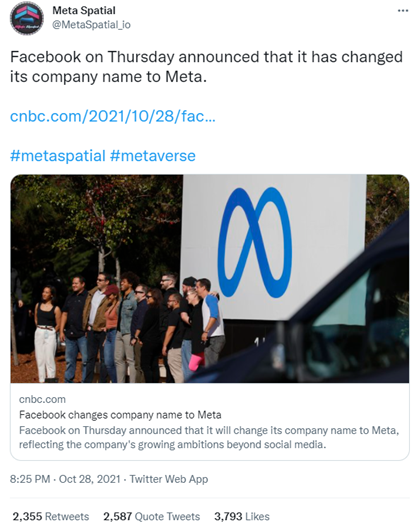 On top of looking at retweets, likes and followers individually, a visualization of these three measures also provides another point of entry to the most influential tweets. Four users with varying number of followers (the size of the dot approximate their number of followers) have posted popular tweets that are liked 1.5k+ times and retweeted 2.5k+ times. Three of them react negatively to the rebranding with words “bs”, “monster” and “same problems”.

Although the number of replies a tweet generates is not shown on Twitter platform, it can be estimated by the number of times the poster’s screenname is mentioned. The most mentioned screenname is the tech company (3096+ mentions) whose tweet is also most liked. The second most mentioned screenname (711+ mentions) is American singer-songwriter Bette Midler, who states that the rebranding is pretentious and a distraction from the issues currently troubling the company.

The most shared photo is an intriguing one; it refers to Meta as an acronym for “Make Everything Trump Again” and seems to be created by Trump’s supporters to criticise censorship imposed by Facebook on the popular website 4chan. 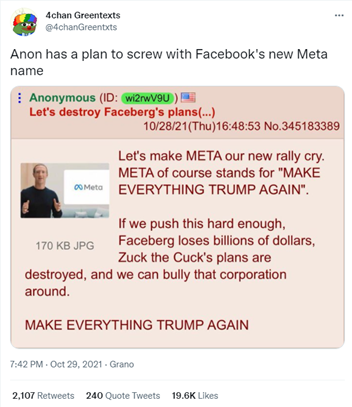 The top 20 hashtags used are mainly Facebook related and neutral technology terminologies, with the exception of the hashtags “#SanctionIsWrong”, “TPLFSURRENDERNOW”, “OLFShaneNoSocialMedia”, “TPLFTerroristGroup” that are related to the instability of Ethiopia allegedly fuelled by Facebook. Nonetheless, in these Ethiopia-related tweets, Facebook and Meta are simply tagged without further elaboration. It may well be that users are simply tagging trending news to promote their own tweets. 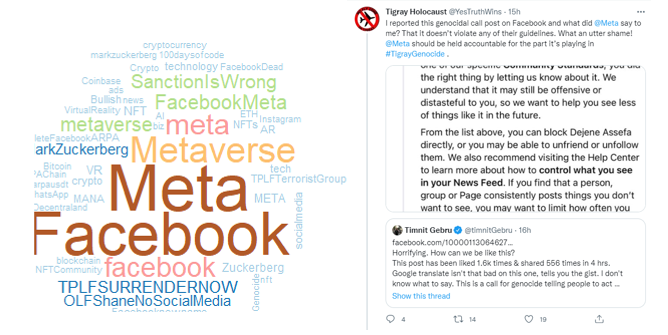 This insight into the data surrounding relevant tweets shows that Facebook’s rebranding move has attracted predominantly negative responses from a number of influential sources that are widely retweeted, followed, liked, and replied to. Some unexpected potential damage is also revealed through dominant hashtags and photo shared, which may not be detected without the help of data sciences.

By utilizing and analysing social media data, Social360 can provide real time analysis to the social media trends in relation to your brand. If you need help in this area, or have questions or enquiries, please get in contact at info@s360group.com or by calling +44 208 875 7969.