The social impact of high-profile footballers: making sure sponsors don’t score an own goal

More than ever before, the footballing world, its players, coaches, and teams are actively engaging with important issues that reflect the social consciousness of the stakeholders and general public around them.

Whether players are taking the knee, or discussing online hate and abuse, addressing social issues on football’s main stage has never been more relevant, and presents itself as a way to use the powerful influence of players to throw weight behind the endorsement of various issues. But sometimes the actions of the footballers don’t always match the corporate strategy of their sponsors.

With the European Championship in full swing, we have already seen the extraordinary influence of footballers on corporate issues and perception; Cristiano Ronaldo made headlines for removing Coca Cola bottles from view during an interview, which the Guardian noted “coincided with a $4bn fall in the share price of the drinks company”. 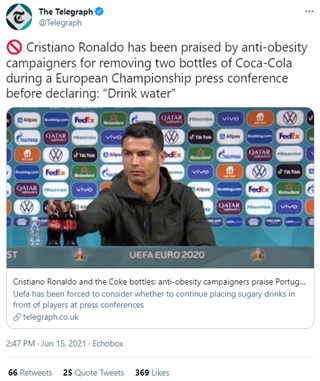 Later, Manchester United and France star midfielder Paul Pogba did the same with a bottle of Heineken, signalling a powerful and highly visible social message in direct contradiction to the intentions of the endorsement strategy and costly sponsorship deals held by these companies. 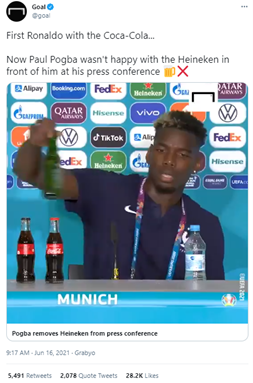 The footballing world – and again especially its players – has also seen a significant push in the direction of addressing online hate and abuse towards players and pundits. The latest campaign being widely circulated is Hope United from the broadcasting partner of the Premier League BT. This campaign comprises of a number of well-known current football players from across the United Kingdom such as Jordan Henderson, Marcus Rashford and Gareth Bale. Providing a number of “TechTips” and videos on addressing hate speech, discrimination and abuse online, the campaign comes after BT Sport’s partnership with UK charity Glitch as part of its other campaign focused on online abuse, Draw The Line. 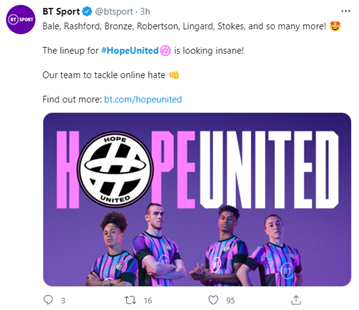 After a season that has been mired by incidents of racial abuse on and off the pitch, these campaigns are clearly aimed at addressing unified calls for action against online hate directed at governing bodies and companies. This also comes at a time of increased pressure towards social media platforms to better address and police the spread of online abuse, and governments to introduce firmer legislation to tackle this issue. Heralded by popular players with positive societal and media presences, the campaign is a great example of due diligence done right. 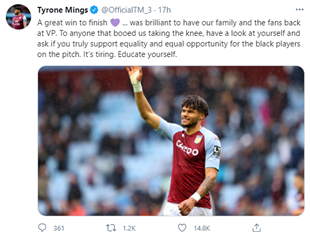 The actions from Ronaldo and Pogba, as well as the campaign from BT, serve as reminders of the importance of properly understanding an audience before delivering a message or product in today’s market; from prominent footballers and commentators to the everyday supporter, the need to successfully address important social issues, from hate and abuse online to ethics of promoting unhealthy products, is very much in the forefront of social expectations and can no longer be ignored.

At Social360 we help football teams, sponsors and players stay ahead of any online conversation that’s relevant to them. Whether you’re a sponsor wanting to make sure that one of the world’s best-known players isn’t about to devalue your product live in front of global media or whether you’re a club wanting to delve into online hatred then we’ve got the experience to tackle the issue.