You’ve been framed! (Or have you?)

He hadn’t signed it! He had written three! Being a Brexit obsessive (even after all these years), I knew the devil would be in the detail and of course the events were reported everywhere, in abundance.

Over the intervening few days, online commentary mulled over the motive behind the route that Johnson chose to take. Number 10 itself was obviously keen to promulgate Boris’s unusual course of action, with the BBC reporting (some would say arguably) neutrally its official line. 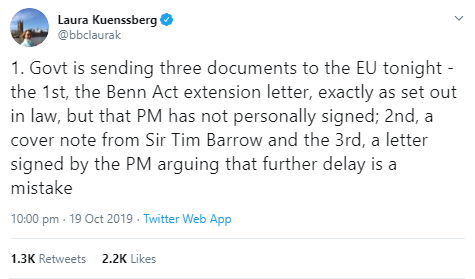 Others suggested he acted every inch the petulant child following his defeat over Oliver Letwin’s amendment. Some claim he had been hoping to bring about (yet another) Supreme Court action.

However the Benn Act required Johnson to write to the EU asking for an extension and that’s what he had done.  The bluster that accompanied his method of communication may have detracted from Donald Tusk’s simple acknowledgement of receipt of the letter, but it had of course been received. Loud and clear. All sides of the journalistic spectrum saw through his actions. On the remainer side of the debate, journalist Mike Hind published an explanation of a PR technique called “framing” to explain the rationale behind Johnson’s three-letter-no-signature strategy.

In a lengthy Twitter thread, he explains that on Sunday morning, the media were discussing the “defiance” in his actions rather than the humiliation he suffered when Letwin’s amendment was passed on Saturday.

Framing, Hind explains, shifts a conversation in the eyes of the media as it changes a narrative angle and throws out a new story to “distract from the bad story”. 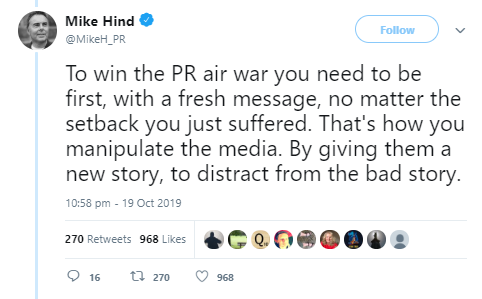 Hind goes on to explain that in the age of social media, communications strategists have millions of opinions to manipulate. And in the soundbite of a tweet, sensationalist and salacious headlines spread, replacing the story that came before.

In Boris Johnson’s so far short tenure as PM he’s encountered scandal and crisis by the truckload. From altercations in his private life, to questionable relationships with business associates, to the embarrassment of a Supreme Court pronouncing he’s given unlawful advice to the Queen – there  always seems to be trouble brewing.

His team are the masters of framing and as a result, the negative stories around Boris never seem to stick around for very long. As Team Vote Leave, it could be argued that they manipulated the conversation enough to win the referendum. As Team Boris, they are certainly working overtime to ensure the message of “getting Brexit done” is at the forefront of his rhetoric.

Social media adds another layer to these strategies, with PR and communications experts exposing and explaining this manipulation, gaining positive online traction for their commentary. This explanation allows us to look at news more objectively, to form opinions from an unbiased narrative or at least to dismiss the sensationalist bias and get to the heart of events. Goodness only knows the twists and turns of Brexit are difficult enough to keep up with without having to wade through the spin.

With the news agenda shifting and changing several times a day it will be interesting to see how many more stories will be manipulated away before October 31. And how in the aftermath of Brexit – if that day ever happens – we will be much more wary of media manipulation and develop our own techniques to decode spin and get to the heart of a story.