Getting the balance right: Authenticity on social media

Social media can be a hugely successful tool for professional sportspeople, enabling them to speak directly to supporters and the public. But it also opens the door to criticism, and finding that delicate balance between professionalism and authenticity can prove to be extremely problematic.

Manchester United’s recent loss to Premier League side Aston Villa last weekend provided a number of talking points concerning the team’s performance. However, one moment was discussed more than any other: Bruno Fernandes’ penalty miss.

Fernandes, who has amassed a total of 5.9 million followers on Instagram alone, has proven himself a popular and successful leader within the squad and amongst fans. After the defeat, he issued an apology on his various social media platforms, sharing his frustrations, failures, and dealings with criticism. His post on Instagram was liked by over 1.2 million users, including teammates Cristiano Ronaldo, Jesse Lingard and Marcus Rashford.

And it wasn’t just the sporting world who shared supportive responses to his post; mentions also came from various other industries, including Portuguese visual artist Mr. Dheo who replied “The best ones also fail. The difference is that they outperform better than others…” and chef Marco Costa who posted “Head up! Go hard! You’re BIG! Let’s go”.

It did, however, become clear that not everyone was impressed with Fernandes’ statements on social media. Notably, popular Sky Sports pundit Gary Neville strongly questioned the authenticity of such posts, calling it “embarrassing” and part of an “apology culture that’s engulfing football”. 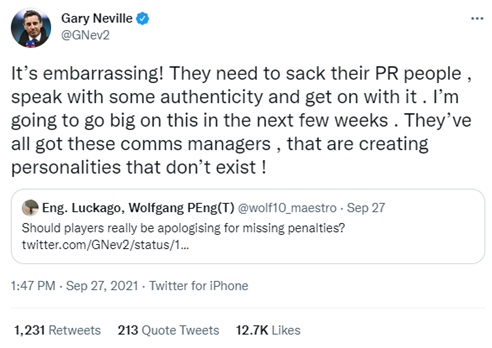 Neville also touched upon the issue in balancing professionalism with authenticity, stating that players should instead focus on live interviews as opposed to social media posts. The pundit appeared to call for a more genuine and authentic approach from sporting stars, with less reliance on PR and comms management. However, at a time of increased questions surrounding social media, this attitude is not without issues.

Naomi Osaka is but one example of a prominent sportsperson refusing to appear in a post-match press conference in recent times, and tennis player Roger Federer has recently touched upon the pressure young sports personalities now face from social media, which did not exist when he entered the industry.

However, with players amassing such enormous followings, and endorsing a number of programmes, initiatives and sponsorship deals on these platforms, the expectation to post will only increase over time as players navigate ways to interact with audiences on their own terms, albeit with assistance and influence from outside agencies.

It is therefore crucial that players and their teams understand their audiences, and the messaging of the general public, before endeavouring to broadcast on their various platforms. 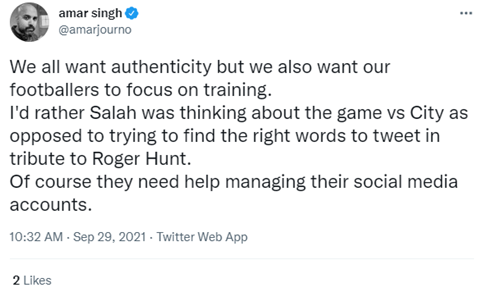